In 2013, I wrote an article on an increasing trend in students achieving perfect scores on the ACT. Back then, we were still operating below the ACT’s stated goal of 0.1% of students earning a composite of 36. With this year’s national ACT report, we have seen that the trend has continued year-over-year, such that the current percent of perfect 36 composites has shot well beyond the ACT’s goal. While we are dealing with fractions of a percent, it seems that a response is needed for the ACT to maintain the distinction of the “perfect score.”*

The odds of getting a perfect score on the ACT (a 36 composite) in 2017 were 0.14%. Put differently, approximately one in every 735 students who took the ACT got a 36.  The odds are roughly equivalent to guessing correctly two letters of the alphabet one after the other.

If these odds seem small, they’re actually the best odds in the past twenty years that the ACT has been administered. In 1997, the odds of getting a perfect score were 0.008%. One in 12,987 students got a 36 composite score that year. The odds would have been slightly better than guessing three letters of the alphabet one after the other (0.006%).

The odds are still small today, but they are more common than they were 20 years ago, by an order of magnitude. It is 17 times more likely that a student got a perfect score in 2017, and this is happening even as the ACT nails state contracts, bringing in – many more test takers that span test taking ability..

For the majority of students, this trend is not actionable. For most colleges, the difference between a 35 and a 36 on the ACT is minimal: both are a solid data point on the application. On the other hand, for high-scoring students (with a composite of, say, 33 or higher) or for students applying to extremely selective schools, it is important to know this increasing trend for several reasons.

First, it does appear that there is more room at the top of the hill. While the number is still quite small – 2,760 students in 2017, to be exact – high-performers have a much better chance now than two decades ago to earn that 36. If one of the items on your “bucket list” is to get a perfect score on a standardized test, you might find encouragement in that knowledge.

Second, if the increasing number of perfect scores tells us anything, it’s that more students are figuring out how to master the test. Since the ACT overtook the SAT as the most popular college admissions exam, students across the country have been taking both tests as practice, figuring out which one gives the higher score, and preparing for that test. There are significant differences between the SAT and ACT that you would do well to consider before deciding on a particular test.

Third, it is worth considering how the ACT will respond to this increase in perfect scores. In 2013, the ACT stated that its goal was to have less than a tenth of a percent (0.1% of students earn a composite 36. Having shot past that goal, one wonders how much greater that percent must get before the ACT takes action and what that action will take. Given that the ACT branded itself as the reliable, consistent alternative to the radically different SAT, it is unlikely to do a massive overhaul of its test. Instead, we are likely to see a slow addition of higher-level math concepts, a deeper requirement for critical, scientific thinking, more advanced reading texts, and more labyrinthine English sentences. The change will not likely be overnight but in order to preserve the brand of a perfect score, the ACT will need to take steps to attempt to lower the percent of perfect scores. 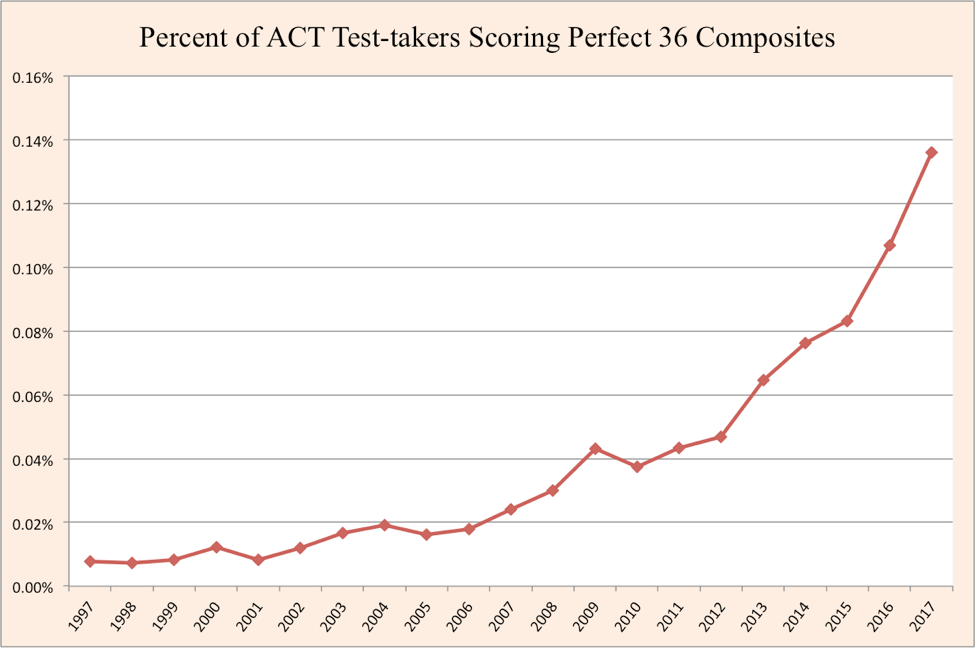 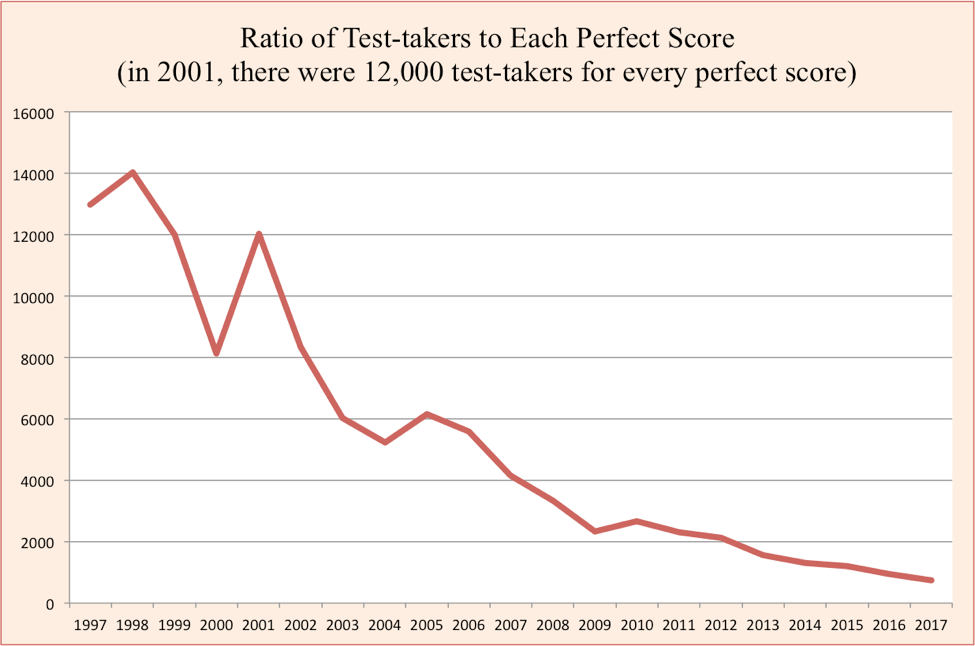