The Odds of Perfection: Too Many Perfect Scores for the ACT’s Good 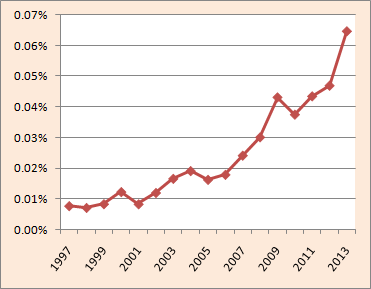 Perfection can be a tricky thing. Too much of it diminishes value. Think of little league where everyone got a trophy. Or that Earth Science class where the teacher promised an A+ if her students simply did the work. Not everyone deserves the label of “perfect,” and the same is true for the ACT. A composite of 36 should be reserved for a select few, and too much perfection should raise red flags over the difficulty of the test. But how many students should get perfect scores? Over a five-year period, students scoring a perfect 36 composite on the ACT increased 82%, from 638 to 1,162 students. What is driving that growth? Is it a function of more students taking the test? As students switch from the SAT to the ACT, are they bringing their test prep skills to bear on a more straight-forward test? Can we expect the ACT to rein in the perfect scores with more difficult math and reading sections? Whatever the reason, the ACT will need to change its game to keep its perfect score meaningful.

Breaking down the perfect scores by state, we can create 2 distinct groups: the “big shots,” and the “Cinderella stories.”

We would expect as much from states as large as these. When you calculate the percent of students who got a perfect 36, those numbers reflect the national average, about one perfect score for every 1,600 students.

These numbers are quite surprising. 1.5% of the ACT test-taking population is earning 15% of the perfect scores. They make a bit more sense when viewed holistically. In “If States, Not Students, Applied to College”, I made the case that when a state prefers one test over another, the less popular test can expect to see higher scores. In a state where most students are expected to take the SAT, for example, those who decide to take the ACT do so for a compelling reason, most likely because they took both tests and saw that the ACT was the stronger. Though such states saw a low turnout, it is likely that the students who did show up performed higher than average, with more students getting that perfect 36.

What does this data tell us? Perfect scores are up across nearly every state. Five years ago, California had 42 perfect scores; this past year, the state had 100. New Hampshire had zero perfect scores in 2009 and in 2013 saw 34. Other states are seeing significant increases in the number of students scoring perfectly. Students in previously SAT-dominant states are seeing that they may perform better on the ACT, and are prepping their way to perfection.

How may the ACT respond?

Should this increase in perfect score students be a cause for concern to the ACT? Not at all, says Katie Wacker, ACT’s Public Relations Associate. While an increase from 0.04% to 0.06% is dramatic, it is still well below the ACT’s goal that less than 1/10 of 1% of its students earns a 36 composite score. “It’s something to celebrate,” Wacker says. It shows the improvement in course rigor which leads to higher student accomplishment.

Still, the way perfect scores are heading, the ACT will need to change its tune if it wants to keep perfect scores below 0.1%. Already, we are seeing changes to the ACT that might provide trickier material to keep the perfect 36 further out of reach. Like that Chemistry teacher who intentionally put a near-impossible question at the end of the test to keep that A+ elusive, the ACT has been ramping up the difficulty of the science and reading sections. In science, we are seeing the appearance of more science content for a section that has until recently tested a student’s ability to interpret charts and find data. As for reading, the October ACT featured a comparison passage for the first time in its history. Too many students, it seems, have been acing those sections. The ACT’s response has been to increase the difficulty.

The ACT’s problems may be solved with its announcement of a computer-based test as soon as the spring of 2015. If each student is provided a computer-adaptive test, similar to the GRE, it would be much easier to “adapt” a test to a student’s individual abilities, making perfection a moving target. Until then, we can expect to see the ACT turning up the difficulty of its sections to keep perfect scores manageable.