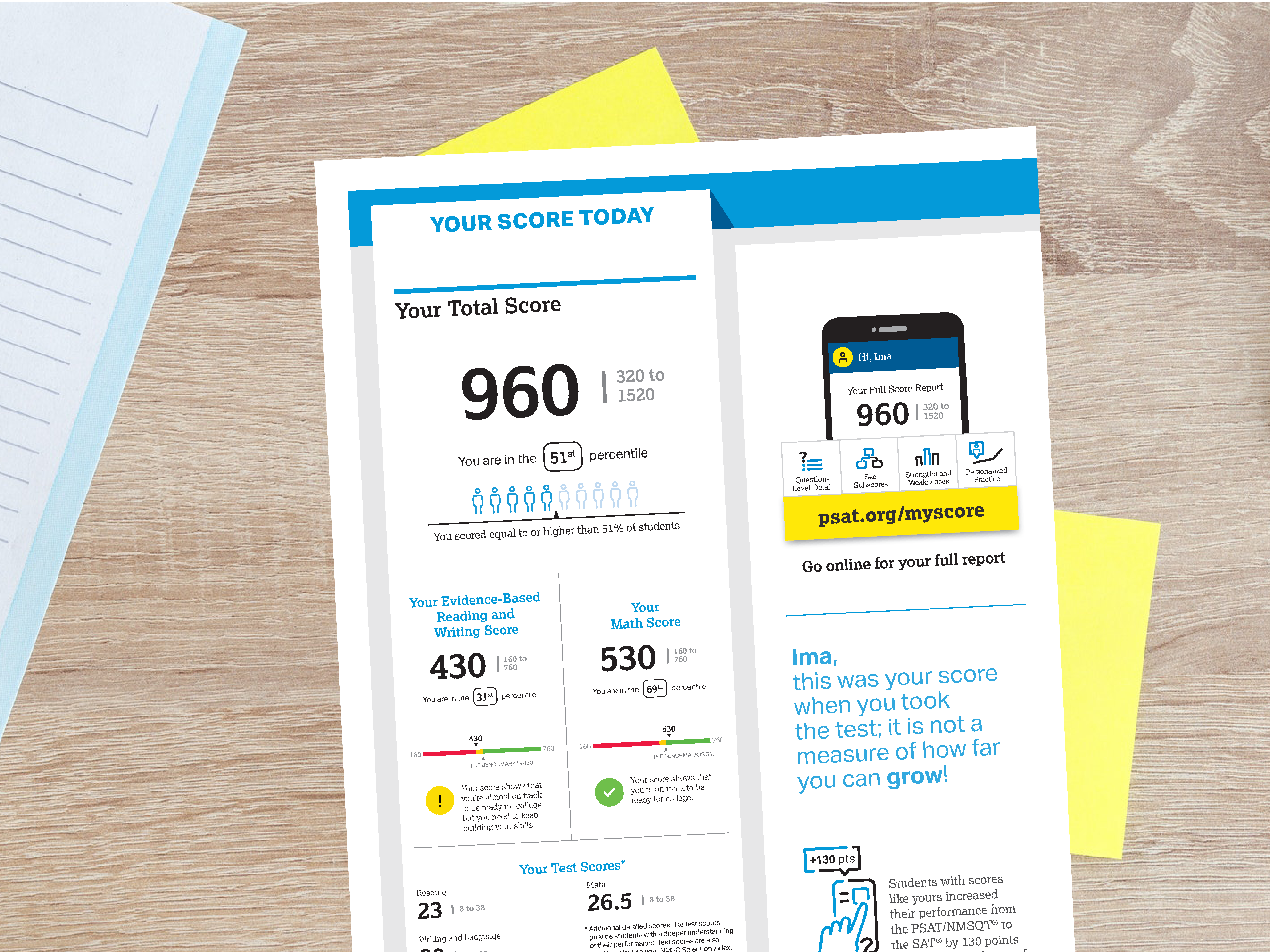 Students who took makeup PSAT test date will have scores by March 8th.

If your student took the PSAT in school on January 26, they’ll receive their scores by March 8th. Aside from the date of the test, the test reports will be exactly the same as the ones that went out in December for the October test.

We don’t know how many students took the PSAT on January 26th since the College Board only releases that information once a year, in the fall. However, it’s been a few months since our last PSAT scores explanation, so we’re bringing it to you again.

What do my student’s PSAT scores mean?

The score report you’ll receive isn’t a full-length diagnostic of your student’s performance (for that, you’ll have to go to their College Board account), but there’s still a lot of useful information in it.

The PSAT and SAT were redesigned together in 2016, so they’re more similar than ever. The SAT’s scoring scale is fairly well-known: students’ scores will fall somewhere between 400 and 1600 (they can score a possible 800 points in the combined Reading and Writing sections and a possible 800 points in the combined Math sections). The PSAT is shorter and slightly lower in difficulty, and because of that the PSAT is scored out of 1520 points: Reading and Writing give us 760 possible points and the two Math sections give us another 760.

The other thing to remember is that the PSAT, like the SAT, is a standardized test. Students’ raw scores – the number of questions they get right in each section – go through several conversions before they appear in their final form.

The first page of your student’s score report gives you the composite and section scores for their PSAT.

PSAT Score Reports also contain percentiles, which rank your student against a comparative sample. A percentile is the percent of students who scored lower than a given score. For example, if your student scored in the 78th percentile in Math, that means they scored higher than 78% of students in the sample group. The PSAT uses two percentiles, only one of which is on the report parents and students receive. The other one is only accessible online.

Nationally Representative Sample: This is the percentile located on the front page of the report. It’s not a comparison between students who took the test in 2021 (or October 2020). Rather, it’s a measure derived from a “standard research study of U.S. students in the 10th or 11th grade and are weighted to represent all U.S. students in those grades, regardless of whether they typically take the PSAT/NMSQT or the PSAT 10.” Essentially, it’s meant to represent a typical high school student.

The College Board measures every student’s scores against its college readiness benchmarks and notes their progress on the report. Underneath each section score, you’ll see either a green checkmark or a yellow exclamation point to indicate whether your student is on track to handle college-level work. Benchmarks are grade-level specific on the PSAT. If your student is in the 10th-grade, that green checkmark under Math doesn’t mean that they are ready for college math right now. It means that the College Board predicts they’ll be ready when the time comes, provided they keep working and improving.

Every student’s report has a National Merit Index, but if your student’s index (a 3-digit number) has an asterisk next to it, then they don’t meet all of the other qualifications for consideration. It’s impossible to know exactly what index number a student has to have to be selected as a Commended Student or a Semi-finalist, as the cutoff is determined by the scores of the current students. Students who are moving on to the next stage in the scholarship process will be informed next September.

Your student’s PSAT report will feature general advice on where to go from here, but to access the full report along with specific tips and content for improvement, you will need to log into their College Board account.

According to the College Board, students who took the January PSAT will not get full questions and answers (the way they do for October tests), but they will be able to see how many questions they got right and how many they got wrong.

What if my student wasn’t able to take the PSAT at all? Are they eligible for National Merit?

If your current junior was not able to take the PSAT in October or January, they can apply for the National Merit Scholarship using the alternate entry form. Time is of the essence, though, because they must submit their application by April 1, 2021. To qualify, they need to have an SAT score from any test administration from October 2020 to June 2021 (they must submit their scores by October 15th).

If your student took the PSAT in school, they’re not eligible to use the alternate entry form. Their PSAT scores will serve to calculate their merit eligibility.

It’s not yet clear how the pandemic (and the resulting low test numbers) will affect the National Merit Selection Index for each state, but it’s possible the Merit Selection Index will be lower, given the smaller number of entries. Students who took the PSAT in school will be informed of their Merit status in September of 2021, while those who applied using the alternate entry form will be notified at a later point in the fall.