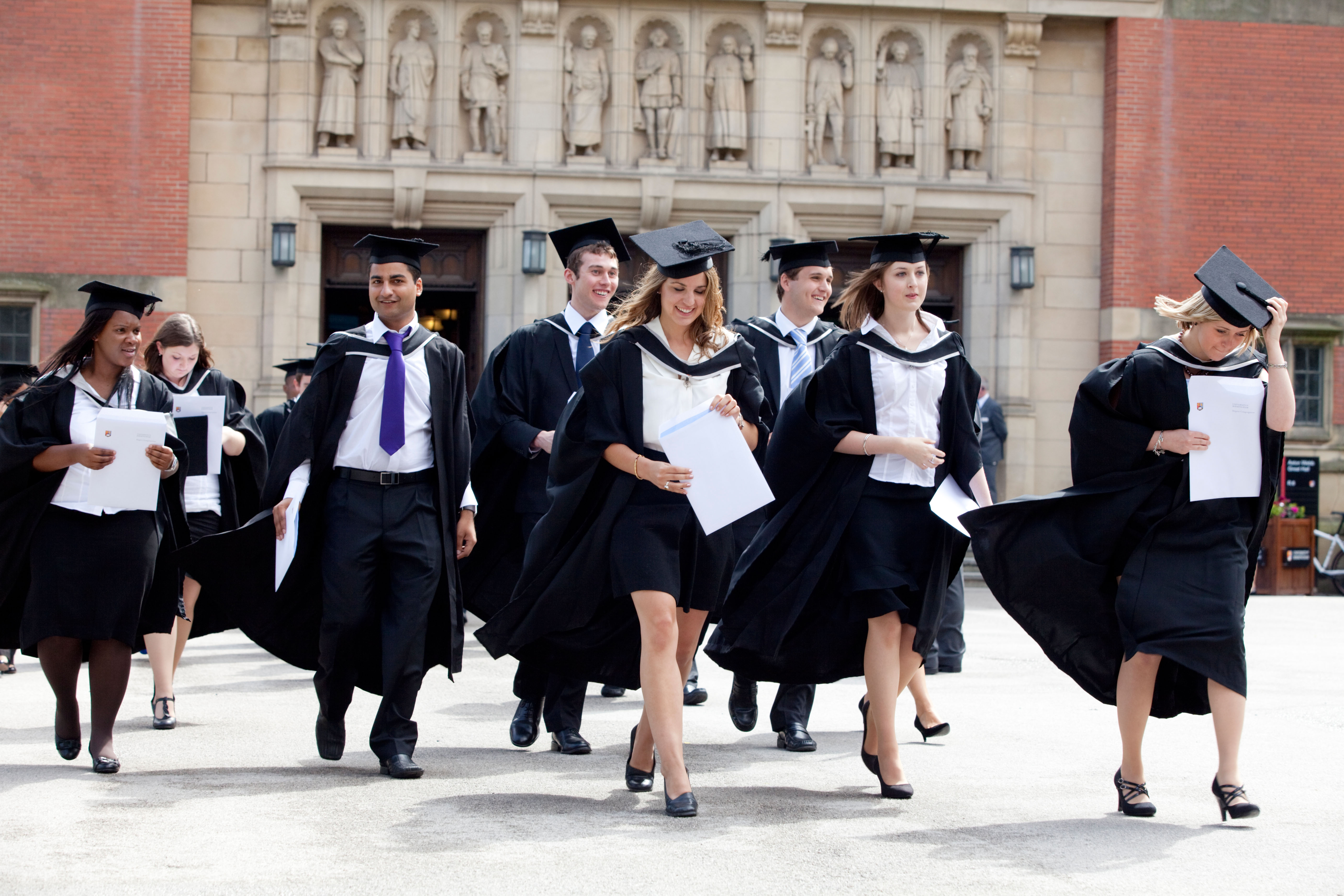 Female students, by and large, are outperforming males at every level of education. The data illustrating this overall phenomenon is quite compelling. Girls, as a group, tend to have higher grades, take more advanced classes, graduate high school at higher rates, and participate in higher education, both undergraduate and graduate school, at higher rates. Indeed, some 70% of high school valedictorians are female.

But the story behind the data is anything but simple. And, although the big picture findings show an overall female advantage in education, the formula is reversed in certain critical areas, where the gap favors male students. For example, although most graduate-level degree programs have more women than men, women are still starkly underrepresented in STEM graduate programs, which often feed into some of the higher-demand, higher-paying fields in today’s economy. In addition, females have been shown to underestimate their abilities in math, believing they are less capable than they really are, which can inform their career selection. And we know that, in spite of any academic dominance that females exhibit, they are still underrepresented in key professions and at the higher levels of leadership of many career fields.

We want education to provide a foundation for future success in careers and life for all students. Yet the gender imbalances we see in education and beyond show that we’re far from achieving that ideal goal. Ultimately, we want to build the broadest and most diverse talent pool possible, one that includes men and women equipped to take on the myriad challenges and opportunities ahead.

Let’s take a closer look at some of the social science research on gender gaps in education. Understanding the research is an important first step to developing potential solutions. As we dive into a series of studies that highlight the group-level differences between males and females in education, it’s important to remember that we can’t overgeneralize or make assumptions about individual students based on gender. While social science reveals gender differences at the group level, social science has also demonstrated that these group-level differences are often small relative to the differences from person to person within gender. The reasons for the observed gaps are complex and likely stem from many factors, and the fact that these differences exist today does not mean that they are hardwired and cannot be addressed over time. As educators, we are continually striving to build a system that helps each individual student achieve his or her potential.

Decades of educational data show that women tend to outperform men academically. Since the mid-1970s female students have outnumbered males in gifted and talented education programs.  Females also have a 25% higher rate of participation in Advanced Placement courses, and they typically have superior grades. Researchers noted as early as the 1950s that girls on average earn higher grades and achieve higher class standing than boys, and today, from kindergarten through college, girls tend to achieve better grades in all major subjects.

When it comes to educational attainment, females hold the clear advantage. Currently 85% of females and 78% of males will graduate with a high school diploma. Upon graduation from high school, females are significantly more likely to enter college quickly.  In 2012 71% of female high school grads were enrolled in college the following fall, compared to only 61% of males. Additionally, females are faster to graduate: 43.9% of females will complete college in 4-years compared to only 34.8% of males.  Within 6 years, 61.9% of females will graduate, compared to 56.5% of males. College enrollment differences between the genders are striking. In 2017 almost 2.6 million more females than males were enrolled in 4-year colleges.

Current graduate school enrollment also skews decidedly female: In 2016 57.2% of first-time grad students were female and only 42.8% were male.  Importantly, however, males still predominate in STEM fields: math and computer science, engineering, and business, where demand is strong and the salaries are high.

Traits that enable academic success are more prevalent among females; however, females tend to underestimate their abilities.

On average, it seems that females tend to display certain traits or abilities that favor academic success in a traditional school environment. Female students are more likely, however, to underestimate their abilities in certain areas, such as math, which in turn can affect their selection of academic classes, college majors, and careers.

Females display an advantage for writing and reading: Females typically score better in writing performance indexes on standardized measures and are rated as better writers by their teachers. The PISA study, which assesses performance of 15-year old students in 38 countries found that cross-culturally, females demonstrate a clear advantage on reading skills, outperforming boys by the equivalent of a full year of school.

Females use more self-regulated learning strategies: Researchers have found females to be more successful in regulating motivation, overcoming distraction and procrastination, and in regulating thoughts and behaviors. Females are more likely to be organized and optimize their immediate environment and structure it for learning. They display more goal setting and planning strategies, rate higher in attentiveness, task persistence, and impulse control.

Females exhibit greater self-discipline in schoolwork: Females tend to report starting their homework earlier in the day and spending more time to complete their assignments.

Females’ relationships may positively affect educational outcomes: Females foster close relationships with peers, teachers and parents.  Friendships between girls involve greater amounts of school-related information sharing, and girls engage in more school-related conversations with their parents than do boys. Female students report to a higher degree that school is important or very important to them, are less frequently in conflict with their teachers, score higher on measures of parental involvement, parental expectations, and peers’ plans to attend college, and report more discussions with their college counselors.

Females display a confidence gap in math and related subjects: Researchers have found that boys tend to be more self-affirming in their self appraisals of their mathematical ability, and females more self critical.  The female confidence gap in math is nonexistent in the elementary grades, but seems to emerge during the middle school transition when female confidence in math ability begins to decline.  Eventually students may come to perceive academic disciplines such as mathematics and technology as male domains, which can influence female student’s orientation towards classes and careers in these fields.

Behaviors that can inhibit their academic achievement are more prevalent among males, but mentors can provide support to make a positive impact.

Boys, on average, tend to exhibit behaviors that may be less conducive to achievement in a structured classroom environment. Teachers tend to perceive boys as their more difficult students, and there is evidence that boys may even receive harsher discipline, in some cases, than females for the same behaviors.  While relationships conducive to educational success may be less prevalent among males, the research has shown that a positive, caring relationship between a male student and an academic mentor can have a significant positive impact.

Males tend to struggle more with disciplinary issues: From the onset of schooling, male students may struggle to sit still for extended periods and may manifest more behavioral problems. Teachers are more likely to believe that boys are harder to control than girls. Starting in preschool, boys are more frequently retained, suspended and expelled.  Male students are far more likely to be disciplined at school, accounting for 71 percent of all school suspensions. Male students on average receive harsher exclusionary discipline than females for the same behaviors. Both male and female teachers reported a greater degree of conflict and overall poorer relationships with male students.

Males benefit considerably from positive academic relationships: Just as males seem to suffer more academically when there is instability or dysfunction in their home environment, males seem to experience greater negative academic effects of poor relationships with their teachers. Low levels of “warmth” between the student and teacher is associated with lower academic gains for boys but not for girls. In addition, increases in student-teacher conflict over time are significantly related to less academic growth for the boys.

Addressing the problem. What are some solutions to the gender gaps in education and beyond?

If females are outperforming males in school and are obtaining higher education at greater rates than men, why are they still underrepresented in certain critical 21st century STEM careers and at the higher levels of many career fields, STEM or otherwise? Why hasn’t academic success translated into equal pay and representation in the workplace for women? And what about the young men? Why do they seem to thrive in school at lower rates than their female classmates? Why do they receive harsher punishments for the same behaviors as female classmates? What does these imbalances mean for society as a whole?

As a society, we must devote the necessary resources to support the success of all of our students. There will be no easy or quick solution.

For boys, some educators advocate the use of gap years to let males catch up in maturity before sending them off to college. Some colleges are experimenting with early interventions to support academically at-risk students (who are currently more likely to be male). Students entering college lacking organizational and self-regulatory skills will be at a significant disadvantage. Teaching young men (and any student who fits this profile) how to learn and study effectively, will help them thrive. Female students are typically better at help-seeking and recruiting external resources; males may be more inclined to go it alone, but often to their own detriment. Institutions can be proactive in anticipating the needs of at-risk male students, providing support and structure to help them succeed.

Parents may support their sons by taking a more academic approach with them. Researchers have found that parents engage their daughters with more academic conversations, but the males may benefit from more academic and college-focused conversations. We know that boys tend to respond quite favorably when positive academic relationships are in place. Perhaps we can leverage this knowledge to more proactively create opportunities among males for mentorship and connection.

For females, there may be structural issues in the career and professional worlds that go beyond what educators alone can remedy. Still, equality in the long-run needs to start with a solid educational foundation for students of both genders. Certainly, the confidence gap in math is something that we as educators can (and should) readily address. We should inform our female students about the phenomenon of strong female academic performance in mathematics coupled with lower self-beliefs. And we should address the middle school shift when females begin to wane in mathematics self-efficacy. Perceptions are infinitely malleable. Males may be more quick to raise a hand to answer a question in math class or to sign up for the math team, but girls are getting better grades in math, all the way up to the most advanced AP level math classes. Attending to this knowledge can help shift beliefs and reframe the highly flawed idea that math is a male-only domain.

We have a lot of work to do, but it’s important we tee up this conversation and attend to the gaps. We can build an educational system where all students thrive.