Testing Timelines: Key Dates For the New SAT and ACT 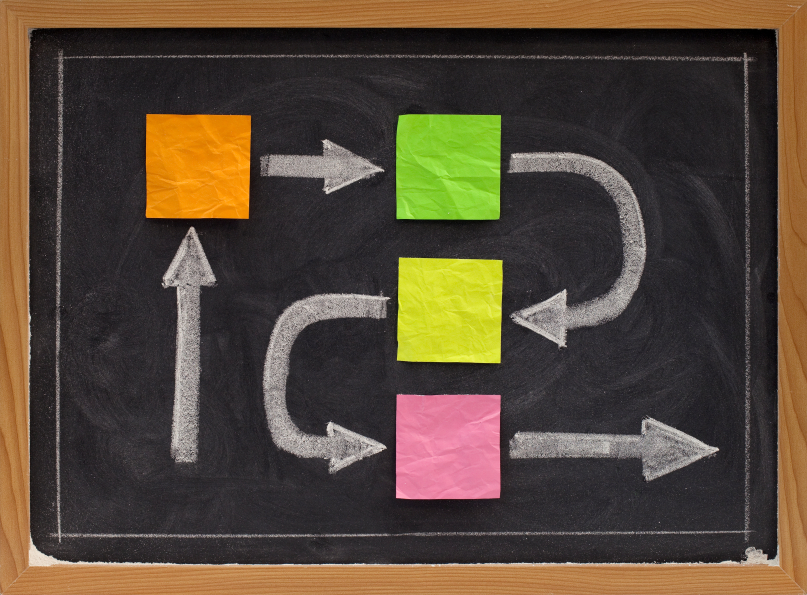 Many changes are afoot in the world of testing, and parents, school counselors and independent educational consultants have contacted us seeking information about the timeline of the changes and which students will be affected.

Let’s walk through the timeline.

The College Board will administer the final “old-school” PSAT on Wednesday, October 15 and Saturday, October 18.  They’ll continue to administer the current SAT for several more months, but this is the last time you’ll see the PSAT in its current format.

The College Board will release sample problems of the redesigned PSAT, allowing students 10 months to prepare themselves for the new assessment.

The College Board will release the first full-length redesigned SATs and a full-length redesigned PSAT, allowing students an entire year to prepare for the March 2016 launch and seven months for the PSAT.  Until those official tests are released, any practice material for the new SAT is speculative, flimsily based on the small sample of problems that were released this past spring.  Until the new tests are released in March and we have a much fuller picture of the actual problem composition, there’s no effective way to prepare for all the nuances of the new test.  With complete, formatted tests and a sizable problem bank, test prep companies will have enough reliable material with which to craft reasonably calibrated and useful prep materials.  Soon after the full tests are released, the College Board will in all likelihood release its own official practice guide with 8-10 new SATs, following the model of the 2005 SAT revamp.  These books will fly off the shelves and will be invaluable to students looking to prepare for the new test.

The ACT will go into a limited rollout of its digital product, releasing the digital ACT to select schools and districts as it debugs the software, makes necessary updates, and gets the product ready for a wider release in 2016. Though many of us in the industry are excited for the forthcoming rich interaction with digital content­ – those game-changing assessments of the 21st century – the initial digital versions will likely be facsimiles of the paper tests. Rather than bubble in A,B,C or D, one will click a radial button. The fireworks will come later, as the potential for dynamic and deeply interactive digital assessments is realized.  If you want a glimpse into what future iterations of the SAT and ACT may look like, we suggest you study PARCC, which is pushing the boundaries of digital assessment.

In the short term, though, the ACT will continue to adjust its content ever so slightly, with more author comparisons in the Reading section and a beefier and more analytical essay to counter the markedly more robust essay of the new SAT.   The ACT will also begin to release more detail on students’ scores, but it remains to be seen if this will be significant to either colleges or students.  The test will continue to be the speed-crazed, achievement-oriented assessment that students have been taking for years.

In this phase we will also see the ASPIRE supplant the EXPLORE (8th grade) and PLAN (9th and 10th) tests, which have acted as pre-ACT assessments. The new ASPIRE, aligned closely with the Common Core standards for each grade, will be unveiled to older students first and eventually to students in grades 3-11.  This is the ACT’s play to become the de-facto Common Core “End Of Course Test” across the country.

Bring on the new PSAT!  Students from the class of 2017 (current sophomores) and younger will face the new PSAT.  This assessment will reflect the changes coming to the new SAT in March of 2016: no more guessing penalty, no vocab-laden sentence completions, a greater focus on Algebra and a backseat for Geometry, ACT-styled charts and tables and graphs, and Common Core alignment with every test item.  PSAT results will be released to students in December.

The final old SAT. The end of an era of testing. This will be a major test for current sophomores, students straddling the old and new SATs. Colleges will most likely accept old and new scores for the class of 2017, following the standard practice from the last SAT overhaul in March of 2005.

The new SAT goes live. This is the new era, the end of aptitude and the ascendance of achievement. The SAT will map tightly to the Common Core and will resemble the ACT like never before. We will see if students gravitate towards the generous timing of the new SAT or continue to migrate towards the ACT. Students will most likely need to take the optional SAT essay at least one time, as they now do on the ACT. 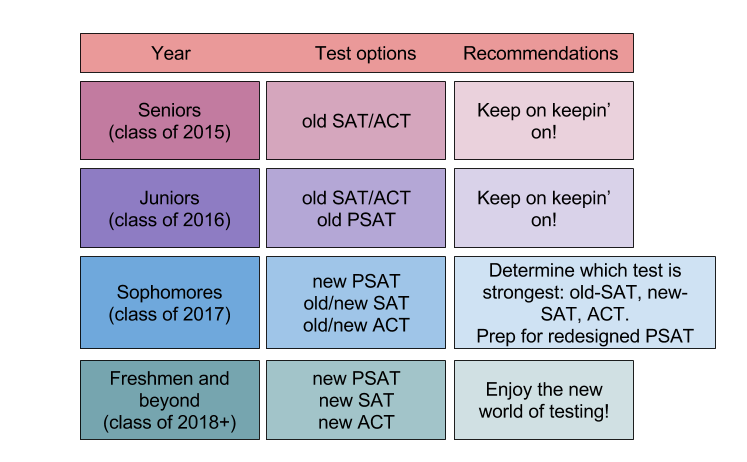 Current Seniors (class of 2015) and Juniors (class of 2016): These classes are firmly rooted in the “old world” of testing.  Current seniors will be done with testing in a few short months, if they haven’t already checked the box for testing.   Current juniors will take their final PSAT in October 2014, missing the new PSAT by a full year.   The new SAT will be unveiled in March of 2016 when these students are receiving their admission decisions.  A small number of these students will see the digital ACT, but paper versions of the test will dominate the admissions landscape for this class.

Current sophomores (class of 2017): These students are living on the bubble, straddling the old and new worlds.  As sophomores, many of them will take the October 2014 old PSAT for practice and then will take the National Merit Scholarship Qualifying PSAT in October 2015 of their junior year.  Those students who are on the cusp of National Merit, as revealed by their October 2014 PSAT results, must prepare for the revamped PSAT.  These National Merit-seeking students will likely use the new SAT guide from the College Board and over-prepare for the new PSAT by readying themselves for the new SAT.   If their October 2015 PSAT scores put them in the running for National Merit, they will most likely need to take a confirmatory new SAT test in 2016 to stay in the running for the competition.

The class of 2017 will straddle the old and new worlds in that they will have four old/classic/vintage SATs during their junior year: October, November and December 2015, and January 2016. Then they will have the new SAT in March, May, and June of their junior year as well as the fall assessments of their senior year. Colleges will most certainly accept both old and new SAT scores from this class, as they did during the last SAT overhaul.  It remains to be seen if colleges will accept old scores from any class other than the class of 2017.  At some point, they will demand new scores to keep everyone on the same playing field.  Because the class of 2017 will have more options than any other class, they will have the extra step of determining their best test.  Some may see this as a burden, but this may be an opportunity for students to find their best of three assessments.  Some students, if they are vocab stars and great at Geometry and abstract math skills, may hit their highest scores on the old SAT and steer clear of the new one. Other students will benefit from the more generous timing intervals and relatively easier vocabulary on the new SAT.  Still other students will be right at home on the ACT. For better or worse, the class of 2017 will have many choices to make in the next two years.  As always, we advocate economy and efficiency in testing – find the right test using baseline diagnostics and ride that test all the way into college.  We do not want to see students preparing for three assessments!  That is a monumental waste of resources.  Get on your path, and master that path.

Students in the classes of 2018 (freshman) and later: These students will most likely live exclusively in the new world of the revamped SAT and PSAT.  Colleges may insist that students in the class of 2018 submit only new SAT scores (or ACT scores, of course).  There will likely be some outliers, but current freshman should generally plan on the new SAT being the default.

There will be a necessary period of transition as colleges learn how to interpret the new test scores and compare them to the old.  Colleges will have no choice but accept the new SAT scores, a distinction from the state of affairs in 2005 when the SAT was last overhauled and many colleges adopted a “wait-and-see” approach to Writing.  Colleges will need to accept the new scores, learn how these stack up against ACT scores, and discern how effectively the new test predicts college readiness.

In terms of preparation, our general guidelines have not changed. Prep should primarily live in a student’s junior year.  Students should start preparing for these tests when their sophomore year is wrapped up and ideally they should complete all testing by June of their junior year.  Only in special circumstances should families go beyond this testing window.  If you would like to develop a testing timeline based on your child’s specific circumstances or if you have additional questions about these new tests, you can always call us at 866-789-PREP (7737) or email us at info@applerouth.com.  We know change brings uncertainty, but also opportunity.  We’re here as a resource to help you navigate these new changes and find the best pathways for your students.