An ACT for the 21st century 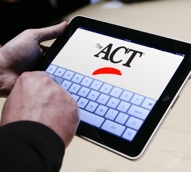 Just after the College Board announces that the SAT will undergo a major overhaul, John Erickson, president of ACT Inc.’s education division, announced that the ACT is about to go through its own radical transformation. As early as Spring 2015, the test, which has become the nation’s most popular, will be computerized. This announcement heralds a quantum leap towards the end of paper-based testing. It will only be a matter of time until the College Board follows suit; within several decades, we will likely see the computerization of all high-stakes educational assessments.

This announcement follows a long line other high-stakes tests making the move from paper to computer. From the GMAT, to the GRE, to the MCAT, most major tests have moved to predominately online versions, with only a handful of stragglers still working with pencils and erasers. Online tests are efficient, and they eliminate the possibility of bubbling errors or faulty scantron reads like those that plagued the SAT in 2006. Plus, online results can be tallied instantly, eliminating that anxious waiting time. Press submit on the final screen of your GRE test, and your score appears on the screen.

The online model has many benefits, but, until now, the scarcity of technology in our schools has prevented any widespread adoption of online testing. The last decade, we’ve started to see that shift. We’ve heard the battle cry to get our kids ready for the high-tech 21st century: “An iPad for every student! Or at least a laptop or a desktop.” As a policy, some high schools now distribute a laptop to every entering student. And many states have started shifting to statewide tests administered by computer. Now, with a critical mass of technology in schools, the ACT is jumping on the train.

One incredibly exciting phenomenon is the potential for deep integration of technology into the tests, which will fundamentally change them.
Gone will be the static assessments. And we’ll see the inception of interactive scientific models in the science section or adaptive reading passages. The test could become much more engaging and intrinsically interesting for students. ACT Inc. is already hinting that computerized science sections may contain such interactive elements as student-led “experiments” or adaptive test sections!

As I’ve seen an easy migration from paper to computer-based tests for the graduate tests that we teach, I’m confident that current high-school students, digital natives, will make the transition with great facility. And many students, myself included, will prefer the computer-based tests, and a chance to compose their essays on a computer, rather than with a pencil and paper.

A new world in testing is dawning. It’s a step forward for our students and schools, and we’ll keep you posted as we learn details of these new developments.